Large language models (LLMs) have unlocked new capabilities of task planning from human instructions. However, prior attempts to apply LLMs to real-world robotic tasks are limited by the lack of grounding in the surrounding scene. In this paper, we develop NLMap, an open-vocabulary and queryable scene representation to address this problem. NLMap serves as a framework to gather and integrate contextual information into LLM planners, allowing them to see and query available objects in the scene before generating a context-conditioned plan. NLMap first establishes a natural language queryable scene representation with Visual Language models (VLMs). An LLM based object proposal module parses instructions and proposes involved objects to query the scene representation for object availability and location. An LLM planner then plans with such information about the scene. NLMap allows robots to operate without a fixed list of objects nor executable options, enabling real robot operation unachievable by previous methods.

NLMap can be combined with LLM planners to significantly augment the capability of real robot operation. We connect NLMap with SayCan, a recent work that uses LLM planners to let robots plan and execute according to natural language instructions. NLMap free SayCan from a fixed, hard-coded set of objects, locations, or executable options. SayCan also fails to plan with global context awareness which is addressed by NLMap. With NLMap, SayCan can now perform a great number of previously unachievable tasks.

As shown in the diagram above, SayCan combines LLM scores and affordance to plan a sequence of steps to accomplish specified by instructions. SayCan relied on a fixed list of object names and locations so would fail on instructions like "Water the plant" beucase plant is not in its pre-defined list. NLMap, on the other hand, actively proposes involved objects, options and query the scene representation for object locations. It, therefore can perform the task "Water the plant".

We first let the robot explore the scene and gather observations. A class-agnostic region proposal network proposes region of interest and encode them into Visual Language Model embeddings. The embeddings and object bounding boxes are aggregated by a multi-view fusion algorithm to create a representation that will be later queried with natural language inputs.

When human gives an instruction, a large language model parses the instruction into a list of related objects. We then query the scene representation for availability and locations of these objects. Executable options are generated based on what’s found. Finally, the robot plan and accomplishes the task based on the instruction and the found objects. 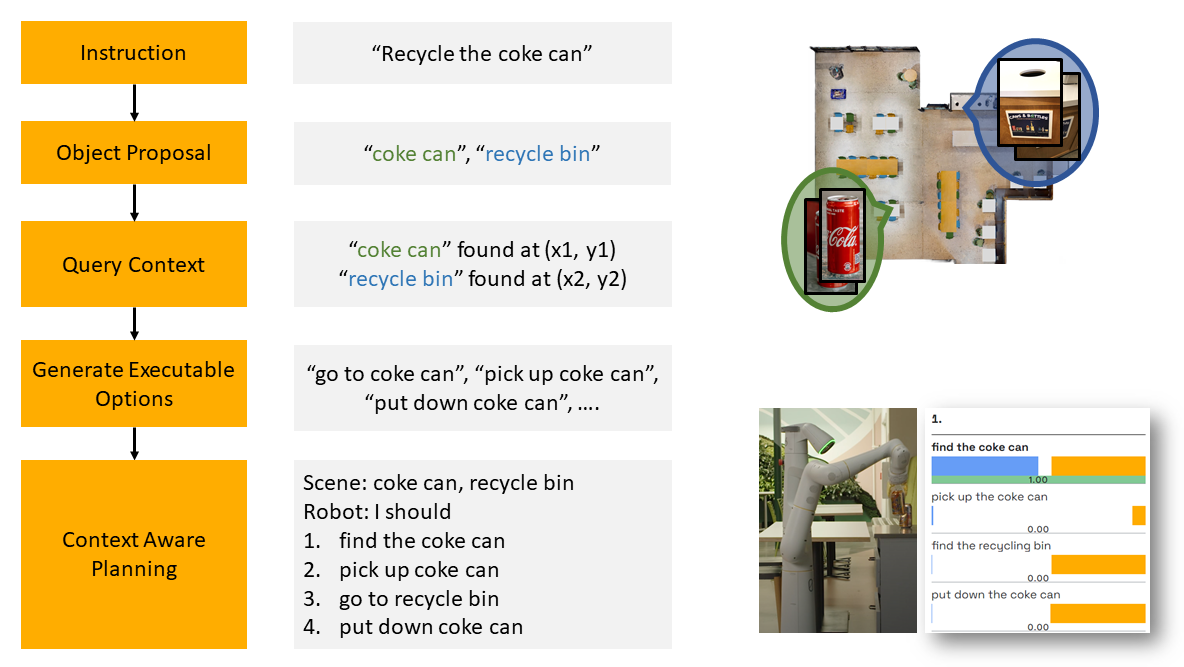